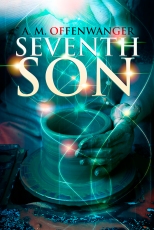 Seventh Son by A.M. Offenwanger
My rating: 5 of 5 stars

Seventh Son by A.M. Offenwanger follows Catriona (Cat), a librarian in the midst of a (almost) quarter-life crisis, on a journey to a mysterious new world. While visiting a museum, Cat becomes captivated by a beautiful, turquoise pottery bowl. As she leans down to look at the bowl, Cat is suddenly whirled out of the museum and lands in the middle of a strange forest with no idea how it happened or where she is. As Cat encounters the locals and slowly learns about this new world, the mystery of her transportation there unfolds, and she must choose whether to stay with her new-found family or return to her own world.

Seventh Son wastes no time throwing Cat (and the reader) right into the action. For the first several chapters, the mysteries stack up on top of each other as Cat explores her surroundings and meets new people. Admittedly, it does take a while for Offenwanger to begin answering the reader’s many burning questions. However, once the answers start flowing, they do so at a steady pace that is satisfying but not a complete information dump. By the end of the novel, most of the questions are answered (except for those that lead into the second book), and the reader is fully satisfied.

The world Offenwanger has created is unique and a touch nostalgic. It hearkens back to years-gone-by with a slower pace of life and an economy that runs on craftsmanship and bartering. (To give you an idea, at one point the world is compared to a Renaissance Fair.) However, while some things are more primitive than Earth, they do have other impressive technologies, and of course, “magic.” What I especially like about the magic of this world is that it is subtle and the natives do not view it as “magical,” but rather as a spiritual part of individuals.

My favorite part of Seventh Son is the characters. Cat’s personality comes across strongly in both her narrative and dialogue and is well-rounded and dynamic. One particular tactic Offenwanger uses to accomplish this is to offset some of Cat’s thoughts or spoken comments in parentheses. Sometimes when writers do this, it reads oddly, but in this novel, the technique is so well-timed that it adds depth to and creates the perfect tone for the words.

In addition to Cat, the other characters in Seventh Son are unique and complex. Offenwanger does a nice job of giving the reader a strong sense of every character, even if s/he is only in a few scenes. Even Bibby, who is too young to communicate fully and the “villains,” who the reader should dislike, are given motives and personalities that allow the reader to empathize with, and in Bibby’s case, love them.

Together, the characters work even better. The relationships between the characters are realistic — fun, familiar, and appropriately emotional. When reading Seventh Son, I truly felt like I was experiencing the interactions of real individuals. The characters frequently made me smile.

My only critique of the novel is that I would have liked to have seen more romantic build up between Guy and Cat. While it is clear that they are interested in each other (and that the world demands a certain amount of conservatism), I would have liked to see a bit more flirtatiousness or tenderness between them. I like that the romantic plot did not overtake the main plot or fall into unnecessary physicality, but I almost felt like Guy and Cat were just meant to pair by default, and therefore, the romantic buildup was a little underwhelming. However, I still adore them as a couple (hence why I wanted more of their dynamic).

As far as the overall story line goes, Offenwanger sticks to the rules of the world and beautifully ties together the different individuals and objects in seamless ways. Some of the twists are surprises, and some an insightful reader will see coming — but they are satisfying nonetheless. The end of the novel is complete enough that it could stand alone, but it does leave enough loose ends to lead into another book (which it does).

If you enjoy light fantasy, a dash of romance, and solving plot puzzles, you will love Seventh Son by A.M. Offenwanger.

If you are interested in reading Seventh Son. and would like to help sponsor my writing and research, you can purchase it at my Amazon Associates Store. By doing this, you will not pay a cent extra, nor will the author receive a cent less, but I will receive a small commission on the sale. Simply click the book’s title or the book’s image.