Portrayals of women in speculative fiction have come a long way. When my parents were children, (the fifties), female characters were there to be rescued or objectified (or both if possible).  Think Flash Gordon or George Reeve’s Superman. Very few female characters, and all of them in peril. Lots of skimpy lamé costuming, and hysterical responses to danger. It got a little better into the sixties, with Star Trek and Lost in Space, where women at least were part of the crew and not just a liability to male heroes. 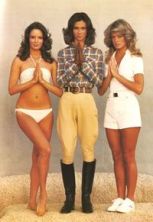 In my childhood (the seventies), female characters had more agency, and even took the lead role in some settings. Think Charlie’s Angels and Wonder Woman.  The Six Million Dollar Man (and the Bionic Woman).  In the years following “separate but equal” policies of race in the United States at large, television seems to have taken that to heart for gender as well in writing shows that featured women who were successful and competent in their own circles, though usually not alongside and equal to men.

In my own children’s childhoods (the 2000s) entire television programs and book series center around a seriously kick-butt woman and even the male-dominated groups have at least one strong female character in the bunch.  Alias, Buffy the Vampire Slayer, Hunger Games, the Avengers, Orphan Black. These women are intimidating and highly skilled. They are tough and dangerous.

That progression is exciting and inspiring. It gives me hope as we move forward. Where might we be in three more generations?

But the work is not done. There’s been a lot of discussion about what a strong, female character really is. In contemporary representation, largely she is some kind of paragon of physical prowess. Quite literally, a strong woman. I like this kind of character way better than I liked the doormats of the past, but she’s still not often a fully-developed, well-rounded and interesting person yet. In my view, a strong female character isn’t really any different than a strong male character: she just needs to be fully developed, allowed to have flaws, history, motivations and doubts.

I wonder if the one-note nature of some of these strong female characters comes about because our heroines are all so young. They are young adults, just finding their way in the world and getting to know themselves. They don’t have history and experience to pull on. They don’t yet know what they don’t know.

That’s why I wrote Going Through the Change: A Menopausal Superhero Novel. I wanted to consider the idea of a woman hero, someone who was already established in herself before the strange new life-changing element (in this case: superpowers) comes in. My women range in age from thirty-two to sixty-seven.  They’ve made a variety of life choices and are at very different stages in life.

Linda Alvarez is a grandmother who was always a stay-at-home mother, until she develops super-strength and other life-altering changes. Patricia O’Neill is career-oriented and prides herself on independence, but finds she needs help to deal with her new alter ego. Jessica Roark is the mother of young children, dealing with depression and a feeling is disconnection with her life, until she develops a more immediate problem with gravity. Helen Braeburn has a grown daughter and has thrown her efforts into advancing her career after the dissolution of her marriage, but things heat up after she develops the ability to wield fire. They’re all bound together by a mad scientist, Cindy Liu, determined to prove to the world that a woman is worth more than just an incubation system for babies.

As I’ve continued to write in this universe, I’ve found it a great backdrop for exploring issues surrounding being female in the early twenty-first century.  It’s what I’ve always loved about speculative fiction. Done right, it can be fun, and it can make you think. That’s what I’m hoping for.

Going Through the Change is going through a change in price for a couple of days in early August. On August 5th and 6th you can get the Kindle edition for free on Amazon. Check it out at: http://bitly.com/face-the-change

Samantha Bryant is a middle school Spanish teacher by day and a mom and novelist by night. That makes her a superhero all the time. Her debut novel, Going Through the Change: A Menopausal Superhero Novel is now for sale by Curiosity Quills. You can find her online on her blog,  Twitter, on Facebook, on Amazon, on Goodreads, on the Curiosity Quills page, or on Google+.

6 thoughts on “Guest Post: More Than One Kind of Woman Can Be a Hero by Samantha Bryant”