In a desert wasteland, one king rules with absolute power and unquenchable lust, until the cogsmith’s daughter risks everything for vengeance.

Two-hundred years ago, the steam-powered world experienced an apocalyptic flood. When the waters dried up, the survivors settled around their moored steamship in a wasteland they named Desertera. Believing the flood and drought were caused by a scorned goddess, the monarchs demanded execution for anyone who commits the unforgivable sin—adultery.

Today, King Archon entraps his wives in the crime of adultery, executing each boring bride to pursue his next infatuation. Most nobles overlook King Archon’s behavior, but when Lord Varick’s daughter falls victim to the king’s schemes, he vows revenge.

When Aya Cogsmith was a young girl, King Archon had her father executed for treason. Orphaned and forced to turn to prostitution for survival, Aya dreams of avenging her father’s death. When Lord Varick approaches Aya with plans for vengeance, she agrees to play the king’s seductress—even though it puts her at risk for execution.

Packed with high-society intrigue, dappled with seduction, and driven by revenge, The Cogsmith’s Daughter offers the perfect mixture of conspiracy and romance. The first novel in the Desertera series, it marries steampunk styling with a ravished dystopian world. 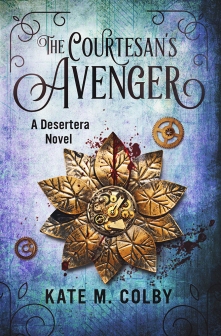 A courtesan on a mission. A brothel ravished by greed. A murder to avenge.

Dellwyn Rutt loves her life as a courtesan. For years, she has enjoyed the simple pleasures and lavish gifts of her trade. Now she wants more: the title of madam.

But Madam Huxley, the brothel’s current proprietor, refuses to name a successor—a problem that is amplified by the legalization of adultery. As the new law sends lusty clients flocking to the brothel, Madam Huxley’s greed grows unchecked at the workers’ expense. Only one outsider seems to care: a self-proclaimed prophet who won’t rest until the unholy institution is abolished.

After weeks of abuse, Dellwyn desperately seeks a way to subdue Madam Huxley’s tyranny. But when another courtesan is murdered, Dellwyn must set her struggles aside and solve the crime. The only problem? All evidence points to Dellwyn’s friends… and to her.

Driven by twisting turns, peppered with witty dialog, and shadowed by unrequited love, The Courtesan’s Avenger is a cozy mystery in a steampunk dystopian world.

Should a king elicit love or fear? Lionel inspires neither… and it could cost him everything.

Lionel Monashe believes he’s a terrible king. After ordering his father’s execution and taking the throne, he struggles to reconcile his royal duties with his innate compassion. His insecurity and inconsistent ruling lead prominent subjects to challenge his authority.

Chief among his adversaries is a self-proclaimed prophet, whose religious zealotry launches the kingdom into economic crisis and civil unrest. When Lionel attempts to make peace, he sparks even more discord and ignites the greatest tragedy in Desertera’s history.

Blame for the disaster falls on the king, sending Lionel in a desperate pursuit to find answers before he loses his crown… and possibly his life.

The third book in the Desertera series, The Tyrant’s Heir portrays a desperate power struggle in an equally desperate, steampunk dystopian world. This political thriller will keep readers guessing until the end.

Will Lionel save his crown? Buy The Tyrant’s Heir today and find out.