Day three of the tour belongs to Christina Ochs and her action-packed fantasy series, The Desolate Empire. Use the link below to read her interview on Kate Evans’s site now! 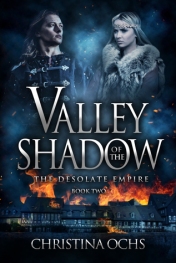 Valley of the Shadow (The Desolate Empire #2) by Christina Ochs
My rating: 5 of 5 stars

Valley of the Shadow by Christina Ochs is the second book in The Desolate Empire series. You can read my review of the first book, Rise of the Storm, here. In the spirit of avoiding spoilers, this review will use intentionally vague language and focus more heavily on my reactions to the novel as opposed to its content.

Picking right up where Rise of the Storm left off, Valley of the Shadow begins by following the aftermath of a large battle. Throughout the novel, the characters on either side of the empire’s opposing forces attempt to lobby for their side, as well as find a piece of happiness and respite from the misery of war.

Stylistically, Valley of the Shadow reads much like its predecessor – the chapters are short and the perspectives rotate, keeping the reader moving quickly, but smoothly, through the action. There is never a dull moment, and each chapter leaves the reader anxiously awaiting the next turn of events.

As for the characters, Ochs continues their development with steadiness and grace. More and more layers of their personalities are revealed as they are put through harrowing trials and given small victories. It’s probably evident from my language, but several of the characters face traumatizing events. The overall mood of Valley of the Shadow is rather bleak, and things seem to go from bad to worse for characters on both sides of the war. However, through it all, Ochs offers enough moments of comedy (and a few key victories) to balance out the heartache. And, as I already alluded, the resulting character development from these tragedies is inspiring and satisfying.

Overall, I enjoyed Valley of the Shadow just as much, if not more, than Rise of the Storm. The pace is quick, without being neck-snapping, the characters are complex and appropriately lovable or hate-able, and the conclusion wraps up enough plot lines to be satisfying, but leaves enough open to have the reader anxious for the next book. As always, Ochs’s writing style is eloquent enough to captivate the reader, but straight-forward enough as to not get in the way of the story. Her world is detailed and only becomes more interesting as she reveals more of it to the reader.

For those of you on the fence about reading Rise of the Storm or Valley of the Shadow, I’ll leave you with this final thought: This series is Game of Thrones without the literal magic (so far) and with tasteful fade-to-black that keeps it appropriate for all ages. I highly recommend it for anyone who enjoys fantasy, action, medieval-style tales, and good old-fashioned sword fighting.

If you are interested in reading Valley of the Shadow and would like to help sponsor my writing and research, you can purchase it through my Amazon Associates Store. By doing this, you will not pay a cent extra, nor will the author receive a cent less, but I will receive a small commission on the sale. Simply click the book’s title or the book’s image. 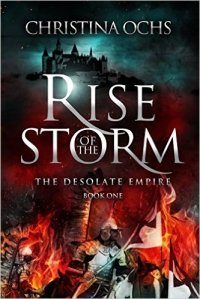 Rise of the Storm by Christina Ochs
My rating: 5 of 5 stars

Rise of the Storm by Christina Ochs is an epic fantasy novel that follows the lives of several characters in an empire increasingly devastated by war and rebellion. With a full cast of characters, political intrigue, romance and a dash of violence, it has everything sword-wielding fantasy lovers crave.

In Rise of the Storm, the chapters rotate between the perspectives of four characters: Prince Kendryck, Princess Gwynneth (Kendryck’s wife), Braden (a military general), and Janna (a commoner). This structure allows the reader to see the empire and its battles from multiple perspectives, which works well for both delivering information and creating strong emotional experiences. The reader will be rooting for characters on opposite sides of the war, which elicits fantastic tension. Likewise, the chapters are rather short. Personally, I enjoy short chapters as a reader – it makes me feel like I’m moving along in the story and encourages me to read “just one more” before putting the book down.

All of the characters and their relationships are well-developed. Ochs provides enough background to give the reader a sense of the characters’ worldviews, while also allowing them ample opportunity to grow in the face of challenges. Seeing the characters develop (even when I don’t agree with what they’re doing) is satisfying. They feel like real people, flaws and all.

From a thematic standpoint, Rise of the Storm deals with several serious themes. Much of the driving force behind the war is related to changing theological views within the empire, and Ochs explores religious freedom, persecution, and religion as a reason for war. Moreover, Ochs deals with feminist issues, such as violence against women and women’s roles in this society. Obviously, this theme is explored from the society’s matrix, but Ochs does a great job of developing strong female characters and helping them overcome adversity. Last, Rise of the Storm introduces political themes as it shows where characters allegiances lie and why.

My only critique of the novel is that I feel like the reader is thrown right into the action without much explanation. For example, there are plenty of characters that are never met but that are mentioned by main characters. Often, the reader is left wondering who these people are and how they are connected to the characters. Similarly, I felt the governmental and theological structure of the world could have been better explained. While pieces were revealed throughout the novel (which is preferable to an information dump in chapter one), I still feel like I don’t fully understand who is in charge of what and how the hierarchy of power works. That being said, this confusion did not detract from my enjoyment of the novel or comprehension of its plot, but I do feel like I missed a little depth.

Overall, Rise of the Storm is a captivating epic fantasy that will transport the reader to an empire filled with rebellion. The characters are complex, the themes are thoughtful, and the novel is steady-paced and never dull. As I said in my introduction: with a full cast of characters, political intrigue, romance and a dash of violence, Rise of the Storm has everything sword-wielding fantasy lovers crave.

If you are interested in reading Rise of the Storm and would like to help sponsor my writing and research, you can purchase it through my Amazon Associates Store. By doing this, you will not pay a cent extra, nor will the author receive a cent less, but I will receive a small commission on the sale. Simply click the book’s title or the book’s image. 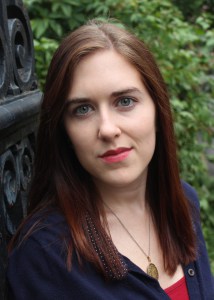 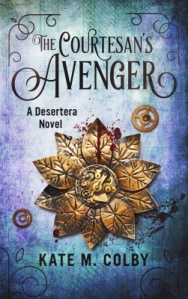